No cheering in the press box

As anyone who’s stumbled upon my Twitter feed can tell you, I’m a soccer fan whose zeal for the sport approaches fanaticism. But over the last 15 years, I’ve driven myself crazy trying to find news about the professional game in all its domestic incarnations, whether it be Major League Soccer, Women’s Professional Soccer or one of the lower divisions.

I make my living editing local news–town councils, zoning boards, school boards–for a daily newspaper. It’s been doubly frustrating for me then that a large majority of my colleagues in the media consider soccer to be a third-class sport.

By and large, soccer is ignored or, at best, squirreled away among the agate results, somewhere behind junior high water polo. Much has been written in the blogosphere about how soccer is a sport tailor-made for the internet. With the advent over the past couple of years of prevalent, cheap and quick streaming video, anyone can now watch live games from around the world. You don’t need broadcasters to watch the game. And you don’t need your major metropolitan daily newspaper to read about it.

Frustrated by the willful ignorance of newspapers and TV, soccer fans like me have created their own media. Blogs, webzines, podcasts and other online publications have proliferated, sustained by fans who weren’t getting the news and analysis they wanted. In many ways, American fans have provided a perfect example of the “citizen journalism” movement that Jeff Jarvis has been preaching about all these years.

It’s been great to see the level of engagement by so many regular fans, but I still find myself yearning for more. I want deeper reporting, better writing and smarter analysis. I want it all packaged in an attractive design, and I want more of it every day. I daydream about a soccer publication that embodies some of the best values of newspaper journalism infused with all the potential of the digital realm. 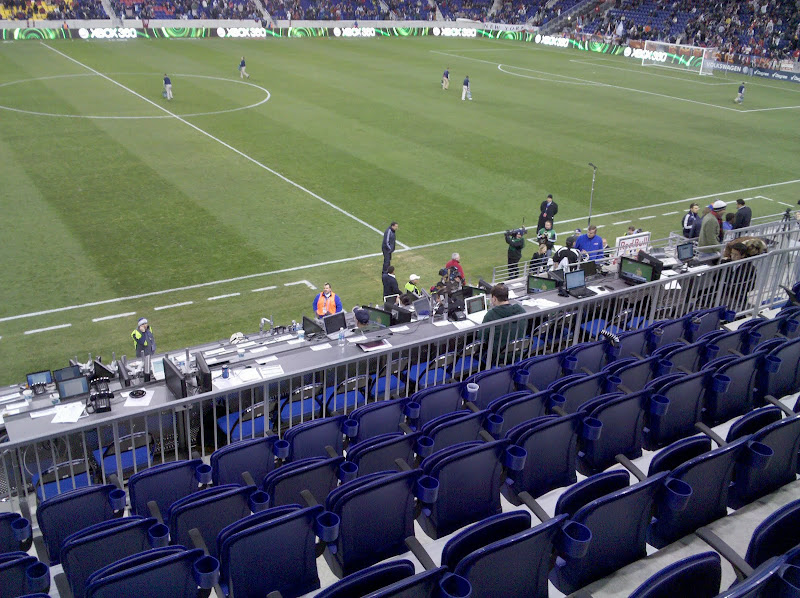 The press box at Red Bull Arena at halftime during the March 27 game against the Chicago Fire.

Many of the better critics and writers in the soccer blogosphere have tackled this subject before. I’m certainly not alone. A More Splendid Life, Pitch Invasion, This is American Soccer and others far more clever and thoughtful than me have bemoaned the same problem. A lot of readers want better coverage of the sport, on both the professional and amateur levels. But there are so few opportunities to make a living at soccer writing, it’s difficult to expect anyone to answer the Siren call as anything more than a hobby.

The problem begins with the big mainstream purveyors of sports journalism, the newspapers and magazines that have traditionally funded serious and ongoing reporting. They won’t, for the most part, touch soccer. Sure, we’ll see a few features between now and July 11, but that’s about it. At many publications, if they even have a soccer writer, he or she is pretty far down in the newsroom pecking order. They’re lucky if their stories get any kind of play on the cover of the sports section at all.

Fine. We’ve spent the better part of two decades whining about this. Soccer speaks for itself. The market for the game is growing and will continue to expand for some time to come. As Richard Whittall correctly observes:

And as large, ungainly media outlets are forced to cut costs and broaden content, in-depth sports journalism will be left to a sea of independent, often fan-biased bloggers working with their own resources. Many club supporters will be smarter, more connected, and more knowledgeable as information about club and league power structures are exposed to an increasingly-global fan base.

The vibrant and growing community of writers that has evolved online has been a great (if only partial) antidote. In some ways, this grassroots journalism resembles the punk rock and Jamaican music scenes of the ’60s and ’70s. If you don’t find what you want, do it yourself. This attitude has served soccer well at a time when the internet enables anyone with the chutzpah to pretend to be an expert and the free time to devote to it to become a soccer pundit with hundreds, if not thousands of followers. The laptop and Wordpress are the three chords of the internet revolution. Anyone can do it, and when the “professionals” won’t, anyone will.

As I researched this piece, I kept finding (or being reminded of) more and more examples of very nice work being done by amateurs, bloggers and professionals alike.

There’s The Run of Play, whose ether binge cultural criticism is nothing if not fascinating (not to mention its design, which is truly unique in this genre). There’s the pseudonymous Fake Sigi (a Fake Steve Jobs aimed at those who follow one of Major League Soccer’s most successful and rotund coaches, Sigi Schmid), whose scathing dissection and analysis of the league-run mouthpiece, MLSsoccer.com, has been a real revelation in recent months.

Then there’s the fan-oriented networks of bloggers and podcasters who spend countless hours watching, breaking down and reviewing matches. Many of them conduct interviews with players, coaches and officials as well as journalists and fellow fans. Seeing Red, a relatively new podcast covering the New York Red Bulls, has been a valuable addition this season to the coverage of the team from the fan’s seats.

(In the spirit of full disclosure, over the past six years, I have edited a pair of soccer blogs, on my own and for my former newspaper. Those experiences, and their unceremonious ends, give me even more respect for those who continue to slog away at the daily grind of blogging.)

Add to these the traditional newspaper and magazine journalists who have taken to the web and social networks to hone their brand and solidify their command of the beat: Ives Galarcep, Steve Goff, Grant Wahl, Jack Bell and so on.

There’s a lot to like. Still, we can and should all expect a lot more.

Understandably, some bloggers and amateur reporters can adopt a defensive posture on the subject of professionalism. It’s not unique to soccer writing, and it’s certainly not unique to America. Although the issues are somewhat different in England, Lukey Moore, one of the fanatics behind the hilarious, exceptional and smart Football Ramble podcast, elucidated this view in a recent interview:

There is a bit of a backlash in the media these days against things like amateur blogs and podcasts, a lot of journalists think that the general public’s opinions are not as valid because they are not ‘proper journalists’. Doesn’t really bother me though, I can count on one hand the number of football journalists I actually respect.

There’s no argument that professional caliber journalists don’t hold a monopoly on opinions or incisive commentary. But in one important regard, they can’t be beat. Few others have the time, patience or ability to build relationships with sources in the game that can unlock difficult stories. That kind of deep reporting can grant them the authority to ask the unpopular questions that the powers-that-be would rather ignore.

The need for game-changers

In my little free time, I want to read something about soccer in North America that: a) I didn’t know already, b) casts a critical eye on the sport, and c) comes from someone who is a skeptical spectator, disinterested in the outcome of any particular game.

There are a few dozen solid reporters on the beat in this country, as the roster of the North American Soccer Reporters will attest. But there aren’t nearly enough.

…a significant population of serious people feel the need for someone with training, experience and standards — reporters and editors — to help them dig up and sort through the news, identify what’s important and make sense of it. That in no way precludes enlisting the audience as commentators, as contributors and as collaborators. (Witness the splendid hybrid of professional and amateur journalism that has kept alive the stream of news from Iran.)

Some days, it seems that 99 percent of soccer “news” could be classified as either game transcripts or outright boosterism. I read quite a bit of it, but I also want the news that you can really only get by chasing it full time, building relationships with players, front office staff, owners, league employees, coaches and referees over the years.

In the jargon of my industry, I want more of the old media’s values in this new media sport: Accountability, speed, skepticism, fearless questioning of authority. Get it fast and get it right, and when you don’t get it right, own up to your mistake and correct it. Without these kind of mores suffused into our writers, I worry that far too many important stories are crying out for more reporting. What happened to Charlie Davies on the night of his accident? What is going on with Shalrie Joseph’s life and career? What kind of negotiations went into crafting Major League Soccer’s latest labor agreement?

Sometimes it seems there’s a disconnect between soccer writing and news journalism. I go to work every day and ask questions of people in power because I act as a proxy for the regular, taxpaying resident. There is a presumption that government should be open and accountable. Regardless of how much we couch it in terms of passion, culture and tradition, soccer is a business. It’s becoming a very lucrative business, and it’s very closely held. It’s a private enterprise, and thus there isn’t that same moral authority to ask questions and demand answers. But still, reporters should be using their access, knowledge and insight on behalf of the average fan.

Someone needs to ask probing questions. We need reporters to help hold managers and clubs responsible for their mistakes, whether they be poor tactical decisions at a US Open Cup match or the financial mismanagement of an entire club (See: Portsmouth, Leeds, Crystal Palace, Chester City, LA Sol, Miami Fusion, etc). We’re being sold a product, whether it’s season tickets or jerseys or television advertising. If we’re going to invest our money (not to mention time and energy), it should be worth our investment.

Marie Hardin, a professor at Penn State’s John Curley Center for Sports Journalism, wrote a piece in 2007 arguing for a stronger ethical grounding for sports reporters:

One has to wonder what other stories in the public interest (about systematic problems and corruption in sports, including those at the prep level) may have also gone unwritten. Although perceived as fun and games, sports at almost every level in the United States have become big business with consequences beyond the playing fields. Sports journalists have an ethical obligation to provide citizens and consumers with fair and balanced reporting on issues that affect their communities, their pocketbooks and the health and educations of their children.

Here in America, we need more reporters walking the soccer beat day in and day out, particularly in towns that aren’t so sexy. We need more people in Kansas City, St. Louis, Salt Lake City and Dallas, for example. We need more people asking tough questions and competing with the writers already out there. A competitor breathing down your neck really helps you kick it into gear and get a better story.

Before we get more writers (which I’ll discuss in a second part tomorrow), we need to add the values of professional journalism to the healthy and established internet community of writers. I’m not advocating for a new alliance of bloggers, each sitting in his own apartment and riffing, linking back and forth. I’m talking about a serious, concerted effort to groom, deploy and support soccer writers.

Tomorrow, I’ll discuss how the writers we have can get better and what we’ll need to do to get more of them.